It might not be everybody’s favorite holiday destination, but we spend last week enjoying a true and original ‘Flemish road trip’.

From Bruges to Brussels, from the port of Antwerp to the outskirts of Kortrijk, we saw it all in a few days time. Our goal? Hunting down non-native plants in their ‘natural’ habitat, with a focus on city environments.

Searching non-native Asteraceae in the port of Antwerp

The peculiarities of this goal made for some interesting sightseeing opportunities, as it turns out that most of our study objects (a set of 8 non-native Asteraceae species) seem to have a preference for what one could call ‘ugly places’: cracks in pavements, depressing flower beds, busy crossroads, abandoned roadsides… Flanders seems full of them, and non-native species are thriving there. 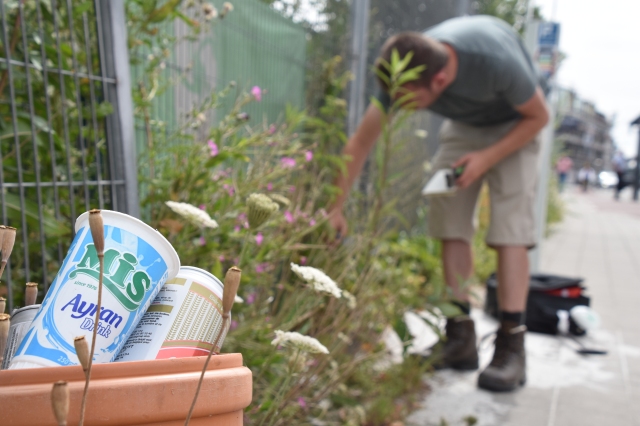 This pavement was not going to win any beauty contest, yet it did host at least 3 interesting non-native species

The occasional relief was provided by Telekia speciosa, a species that mostly seems to escape from large, rural gardens, with a love for the shadow-light dance of the forest understory.

Telekia speciosa with a brimstone butterfly

Beautiful or not, our treasure hunt through Flanders cities has been highly successful so far. And that could have been different. We relied for a large part on freely-accessible observations of our species from the previous decade, and it was always a mix of excitement and fear when arriving at a new locality: would the mentioned species actually be growing there at the moment? Many a population had been destroyed, wrongly named or simply wrongly georeferenced, which did not facilitate our search.

Yet in the end, the harder it was, the bigger the reward when seeing those beautiful flowers looming in the distance when turning the last corner after a long drive. Scientific treasure hunts as they should be!