The beginning of June saw a gathering of great minds in the city center of Antwerp. Thanks to support of the Research Foundation Flanders (FWO), we could invite over 30 ecologists and microclimate specialists to our beloved city, to have 3 days of inspiring discussions on our SoilTemp-initiative.

In exciting anticipation of the meeting: programs and people, bring them together and  magic will happen

SoilTemp is a new global network, launched in autumn 2018, aiming to build a database of in-situ soil temperature measurements for use in ecology. A critical initiative, as has been shown that we are currently lacking an overview of the temperatures that truly matter for organisms, with many of our global climate models based on weather stations in controlled environments at more than a meter up in the air.

SoilTemp brings together all these scientists who are measuring the microclimate in the soil, and uses the combined power of global teamwork to once and for all answer the question how soil and air temperatures differ, and what those differences mean for our biodiversity.

To kick this initiative off officially, scientists from Flemish universities and far beyond put their heads together to decide how to answer the most crucial questions with the database at hand. In the inspiring setting of the ‘Hof van Liere’ at the University of Antwerp, plans were made for the future: papers to write, pitfalls to avoid, global collaborations to expand.

(Part of) the international crowd propelling SoilTemp to the future. There is many more people to thank: those who already left, yet also especially also all data contributors who form the backbone of the network

After a first afternoon with keynote lectures of experts from Antwerp to Australia, and two days of finetuning plans for the future, now it’s all hands on deck. The more than 15.000 years of temperature data from all over the world are being put in position, and first results are rolling in. Stay tuned for more, or – even better – join this amazing endeavour! 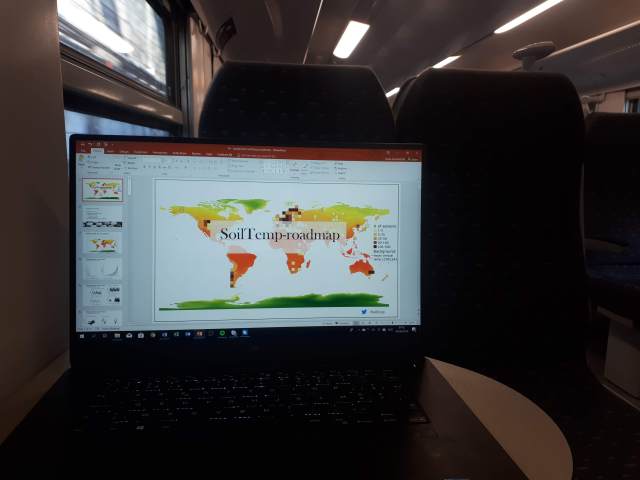 Finetuning the SoilTemp-roadmap on the train to the meeting. May the rails be straight and the SoilTemp-train ride fast!