Interested to join our MIREN Trail Survey? Find all the details here. The story below gives you a feel of how it works.

The 20th of June, Davos, Swiss Alps. The day before the longest day of the year, and amazing weather is predicted. Also the day on which I decided to kill several birds with one stone.

I had to be in Davos for the Polar2018-conference, which brought together scientists studying the Arctic, Antarctic and high mountains. And this visit to Davos provided the perfect opportunity to collect data for our MIREN Trail Survey (all details on it here). With this global survey, we study some globally distributed plant species along mountain trails; and everybody can help. This summer, we are launching the project in full, with athe help of a great app – Survey123 – that makes joining very easy. By now, we already collected up to 3000 data points, and have engaged scientists in 13 different countries; and summer only just started!

So I added a nice Swiss trail to the growing list of sites. A local mountain trail ecologist suggested me the ideal one: hiking up in the Flüelapass from Tschuggen to the top of the Pischahorn. A nice hike with some ideal features for the survey: it started above treeline, which increased the chance that I would pass the upper limit of our study species’ distribution rather quickly. It also crossed 1000 meters in elevation, which promised a nice climate gradient, and it was rather touristic. The latter fact is interesting, as we are focussing on species that are following humans up in the mountains. This trail would allow us to check if they do that in Switzerland as well.

I decided to focus on all 4 of our study species: white clover (Trifolium repens), red clover (Trifolium pratense), common yarrow (Achillea millefolium) and narrowleaf plantain (Plantago lanceolata). A brave plan, as searching all of them would slow me down a bit, especially in their native range, where they can be common. The Survey123-app allows you to mark the first and last occurrence when a species occurs continuously, but even then you have to keep a close eye on the trailside to make sure the species is still there. If you are new to the project, or have limited time, I thus recommend focussing on one species only. In that case, it’s even easier, as you can save your answers as favourites in the app, and copy-paste them for each observation. 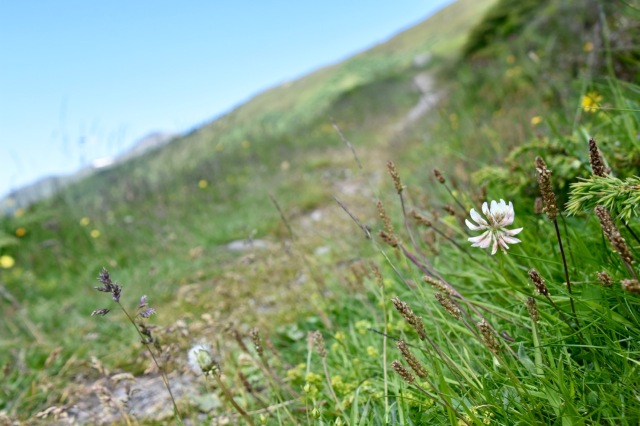 White clover along my study trail

As predicted, the first meters of the survey went rather slow. The two clover species and common yarrow were very common in the grassy trailside vegetation, and I had to walk slowly to find them all. Especially common yarrow turns out rather hard to find this early in the summer, before the flowering period. Luckily, the plantain was nowhere to be found; one species less to keep an eye out for!

Soon, however, things started to change. The vegetation became more alpine, and the grassy patches slowly dissappeared at around 2000 meter. With them, our three species vanished. That was no reason to stop hiking, though. The higher elevations might hold some surprises, and the absence of occurrences is highly valuable as well. We are planning to use these detailed observations to model the distribution of the species along mountain trails with high accuracy, and knowing the ‘true absences’, i.e. where the plants do not occur, is in that regard very important. So I kept hiking up, and enjoyed the fact that it just went a lot faster! 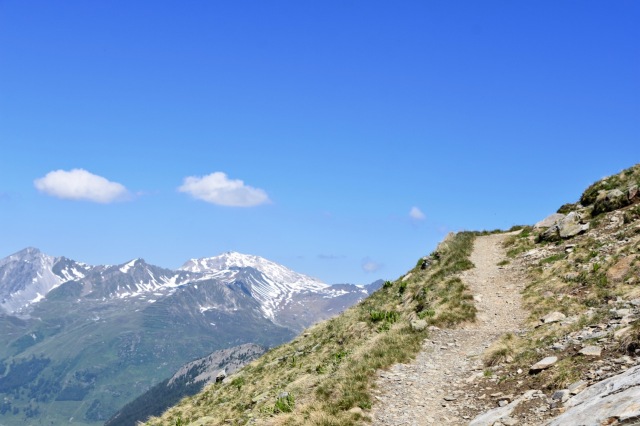 At high elevations, the alpine vegetation gets sparser, and our study species disappear

And indeed, the high elevations did hold a surprise: at around 2500 meter, so 500 meter higher than their last occurrence, the species suddenly reappeared! The reason: a ski lift and a restaurant. Such introductory points are crucial for the distribution of our species, so the app allows you to mark their location as well.

The ski lift, a quick way to the top for seeds of our study species

After that, it was over. Vegetation cover decreased rapidly, and only rocks remained. No chance for our species. Yet again, hiking up provides us the ‘truly observed zeros’ that are so crucial, so I added another 400 meters to the top. A relaxed climb that felt like a holiday, as did the beautiful views on the leisurely way back. 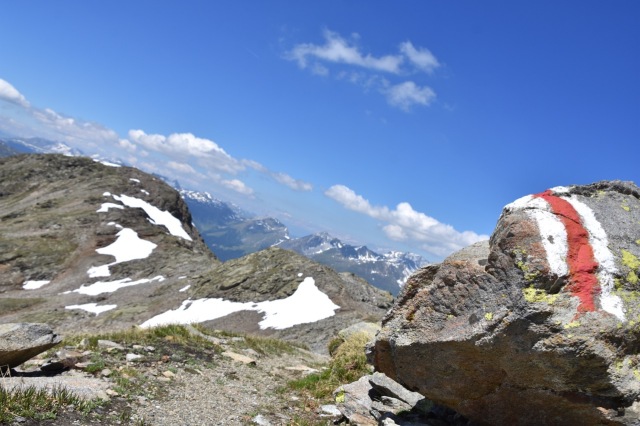 The trail at the top of the Pischahorn

So after less than 6 hours of hiking, I made it back to the car, having realised a hike of over 10 kilometers that delivered me tons of beautiful views, a bunch of unforgetable memories and 300 interesting datapoints. Who knows a better way to spend his time?

Trailside vegetation with alpine daisy flower, and the ski lift in the background

Interested, and tempted to try as well? You should! We welcome data from any mountain anywhere in the world. Just one more hint: I noticed the gps of my phone needs some time to become accurate after it fell asleep. This is important to keep an eye on, as the power of our approach lies in the high accuracy of the observations. We need an accuracy of around 5 meters, as we will use the data as presence/absence in pieces of trail of 5 meter.

The chapel of Tschuggen in the early morning: the start of my hike