Posted on July 3, 2020 by lembrechtsjonas

Two big achievements yesterday: two of our master students defended their thesis, and will thus be able to put an endmark behind their education! A big congratulation to both Ilias Janssens and Bram Vanheule for all they achieved. 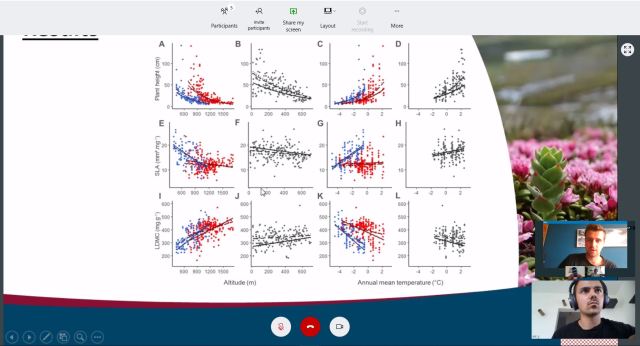 Ilias studied the relative importance of climate and disturbance as driver of plant community traits, using a huge dataset of plant traits from over 160 species from the Scandinavian mountains. Main result: local disturbances like roads and trails have surprisingly small effects on community traits in comparison with large-scale drivers such as temperature.

Bram had a much different arena to work in: Western European cities. His question: how do non-native plant species perform during a heatwave along a gradient from city to rural zones. The conclusion? Urban Heat Island effects are much less important than we anticipated; it is at the smallest scale (e.g. amount of soil available around the plants) that stress-levels are defined.

We hope to bring you more details on these fascinating topics soon, but for now wish the students all the best in their upcoming careers.