A black-listed ball of fur

The raccoon can currently be seen as a winner in the evolutionary race for survival. They seem to spread more and more in their native range in North America, because they can profit from the new niches created by urbanization. But there is more. Since the second half of the 20th century, they have increasingly been recorded from Europe, Russia and Japan. This success-story makes raccoons a fantastic example for my story.

After some deliberate releases in Europe (oh, they are funny to hunt down!) and escapes from zoo’s and households (oh, they are funny to have!), they took some time to adapt to the European environment. It turned out there was no raccoon-like animal in Europe (they now are the only representative of their family on the continent), so the raccoons took their chance. They started spreading steadily to France, the Netherlands, Austria, Switzerland, Luxembourg and many other countries… 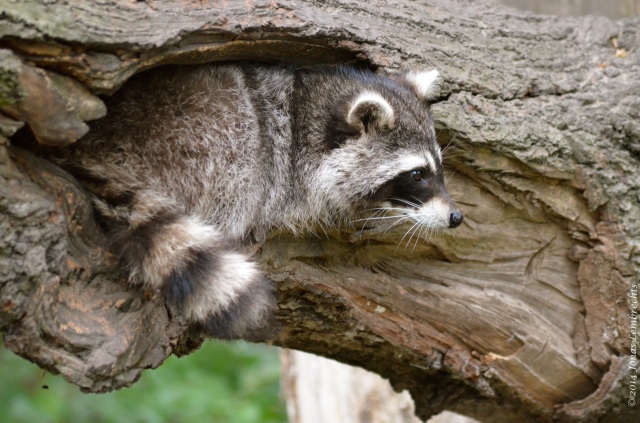 Currently, they managed to work their way up to the highest regions of the Belgian alien species watchlist. They are seen as a high environmental hazard, but their range is still restricted, as they only occur in large numbers in the southern part of the country.

All in all, these cute balls of fur are getting very well adapted to the European environment. That is bad news for a lot of other species, because the raccoon eats almost everything in its reach. However, the chance of them munching away a whole bird species is limited. Their ecological damage is hence present, but not dramatic.

Their main danger lies somewhere else: they are carriers of a large set of illnesses. In North-America, raccoons are the main carriers of rabies (there is a possibility that this will occur in Europe too). They also host a variety of worms that can be a serious problem for human health (better stay away from their faeces, you are warned!).

However, it is not the potential impact that intrigues me most. What I find most interesting is the quick adaptation to the urban environment, in such a way that raccoons could expand their range dramatically over the last few decennia. There is a clear parallel with the plant species in my mountain studies, with their perfect adaptations for human disturbances. This helps them all the way up in the mountains, possibly even higher than could ever be expected from their historic distributions.

It is those species that should be watched carefully, as they will most certainly be the future winners in the game of life: the species adapted to the anthropogenically disturbed area, the quickest growing ecosystem in the world.

Pictures from a recent visit to the ZOO.

9 Responses to A black-listed ball of fur