Posted on January 29, 2018 by lembrechtsjonas

Each year, at the eve of the World Economic Forum in Davos, the Global Risks Report is published. The Global Risks Report is created by experts and decision-makers from all over the world, and this year’s version covers more risks than ever. It focuses in particular on four key areas: environmental degradation, cybersecurity breaches, economic strains and geopolitical tensions.

While the 80-page document (find it here) is definitely worth the read, it is the first graph on page 3 that most easily catches the eye: 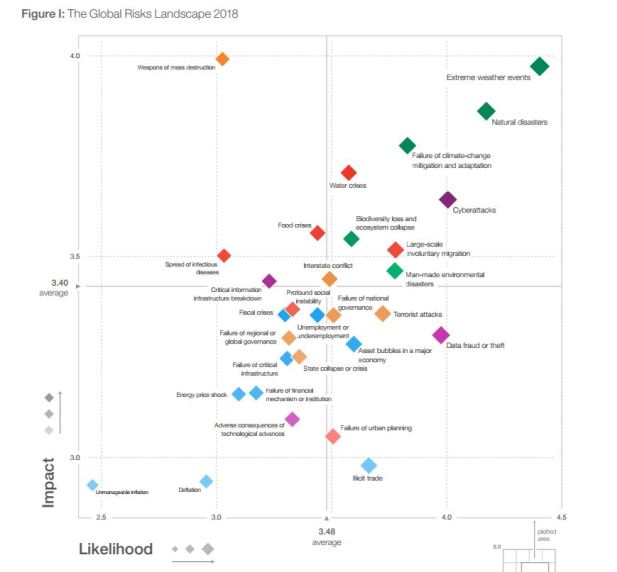 The graph distinguishes between impact and likelihood of the different threats to our world (with the different colors depicting the 4 different groups of threats identified above. While the largest impact is predicted from weapons of mass destructions (“my nuclear button is much bigger than yours”), the three dark green dots on the top right seem the most impressive: a high impact combined with a high likelihood; i.e. the prediction of very likely and very serious damage.

These three green dots are environmental risks, with the one at the top depicting extreme weather events, followed closely by natural disasters and failure of climate-change mitigation and adaptation. But even the next one (the dark orange dot of ‘water crisis’), albeit a societal issue, is highly related to the abovementioned environmental threats. Later graphs in the document show this interconnection between environment and societal issues even more (see the original file). Water crises, food crises, involuntary migration, spread of infectious diseases, all of them are strongly intertwined with the issue of a changing climate.

What does that mean? It means it is ‘two minutes to midnight’ on the Doomsday Clock, as officially stated by the Bulletin of Atomic Scientists. Worrisome, yes, but do not forget that our Doomsday Clock can easily count backwards again, so do not give up hope as long it is exactly midnight!