Aliens in your garden!

Posted on January 22, 2014 by lembrechtsjonas

This week I presented the concept of invasive species to a very interested group of gardeners. It turned out to be a really fascinating talk in which we together looked at the story from a more practical point of view.

My main objective was to create a nuanced image of invasion, showing all major pro’s and con’s of our modern habit of moving around all kinds of species on this planet.

I also wanted to prevent them from blindly tearing out all plants in their beautiful gardens the moment they realize most of them probably are aliens. Because that is what I had to tell them: most of the plants in our gardens are not native for Europe. Exotic plants with nice colors, beautiful flowers and fantastic structures, introduced here from the tropics, from South-America, from Asia. All brought here deliberately, all of them nicely fitting the definition of aliens. 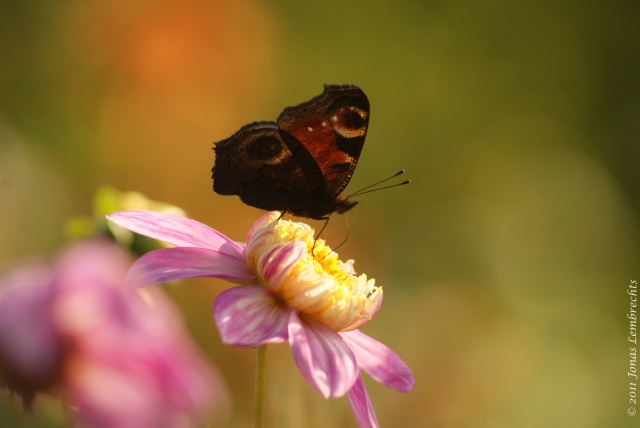 Dahlia’s, exotic but not invasive… And a great plus for the native butterfly populations!

However, not all alien species are a problem. On the contrary, most of these garden plants only have advantages as they stay well-behaved within the edges of your garden. There is this easy rule that only one out of 1000 aliens becomes invasive. That is only a tiny percentage, so you can for now leave your dahlia’s unconcerned where they are!

Of course, this one unfortunate bastard that beats the other 999 contestants can become a real plague as it changes status from ‘alien’ to ‘invasive’, leading to damage up to billions of euros (damage caused by aliens will be discussed in a later post).

It is very hard to predict in advance which species will be the ‘chosen one’, so a little bit of care will never be unnecessary. If a nice local alternative is available (for example if you think about planting a tree), the best strategy is to give a native option priority. And always keep an eye open for the black list-species, as they should better be avoided!

This entry was posted in General. Bookmark the permalink.

2 Responses to Aliens in your garden!