A story of hotspots and stepping stones

Predicting the faith of exotic plant species in cold-climate mountains: our new paper is out now in early view! You can find it here.

Abisko, a small village north of the polar circle in Swedish Lapland. The origin of several mountain trails, winding through the pristine subarctic vegetation towards the breathtaking views at the top. A vegetation mostly consisting of slow-growing mosses and dwarf shrubs that seem to have been there forever. Yet during the last few years or decades, changes in this vegetation increasingly start to become apparent: several new species that are traditionally not a part of the subarctic vegetation are popping up along the trails. Clovers, common yarrow, sweetgrass or annual meadow grass, species that are typical residents of the milder parts of Europe, are now getting a foothold even here, in the high north. They border the trails, grow in the roadsides, line the buildings at the ski resorts and seem to follow humans with every step they take. 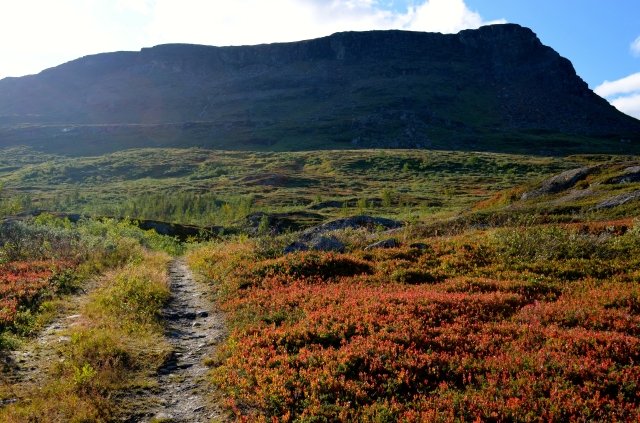 The higher up you go in the mountains, the less common these new species become. At some point, often close to the treeline, they disappear entirely. Why do they stop there? Are these elevations finally too cold for exotic species to survive, or is it just a matter of time till they find their way to higher elevations? What drives their distribution and, most importantly, where will we find them in the future? 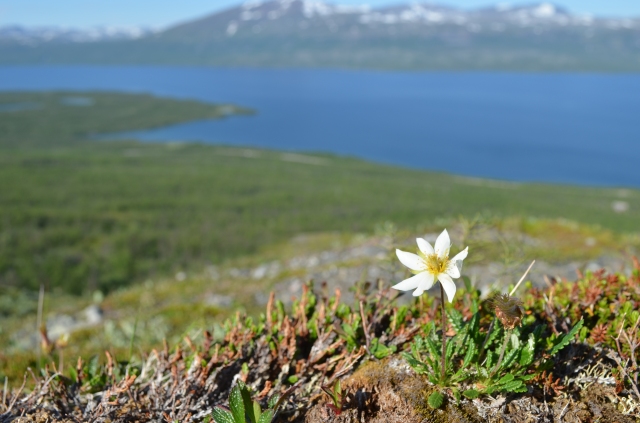 The subarctic mountain vegetation is dominated by sturdy sedges, tiny mosses and small flowers, like this mountain avens (Dryas octopetala).

To find out what the chances of these non-native species are in the coldest and highest mountains, an international team of ecologists set up an experiment high above the current elevational limit of these species. This was done at 400 meter above the local treeline, in an area where spring and autumn are almost back to back, and the full growing season lasts only a little more than two months. In this harsh environment, dominated by sturdy sedges and tiny mosses, they tested the potential of six non-native species, which have their origins in the mild climate of Western Europe. They simulated different human stressors (e.g., disturbance and soil enrichment) and planted seeds of the six focal species along a temperature gradient. Expectations were low: for a species used to the mild winters and relatively long summers of Western Europe, the high alpine zone of subarctic Lapland was unlikely to be hospitable. 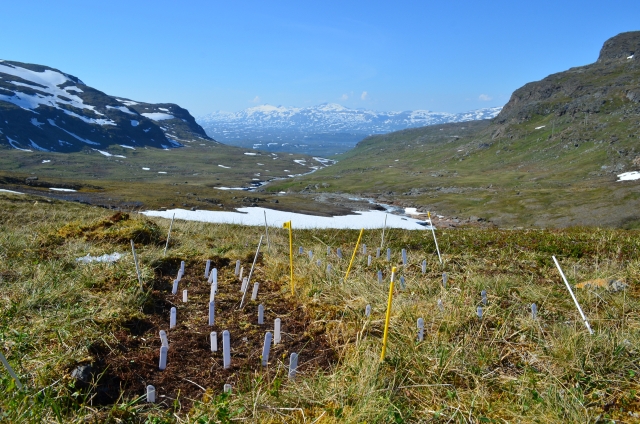 Experimental plot in the mountains of Swedish Lapland

Yet the results were unsettling. Under ideal circumstances (e.g. warm, south-facing slopes and disturbed plots), the seeded plants managed to survive two growing seasons and a winter and they also produced significantly more biomass than in the control treatments. In undisturbed natural vegetation, on the other hand, success of the sown exotic species was negligible. Thus, only plots in which anthropogenic influences, such as fertilization and removal of the vegetationere combined with a sufficiently warm microclimate, resulted in establishment success for the exotic species. If, and only if, those two factors were present, the possibilities for exotic species to establish increased drastically, even at elevations far above where we find them now. 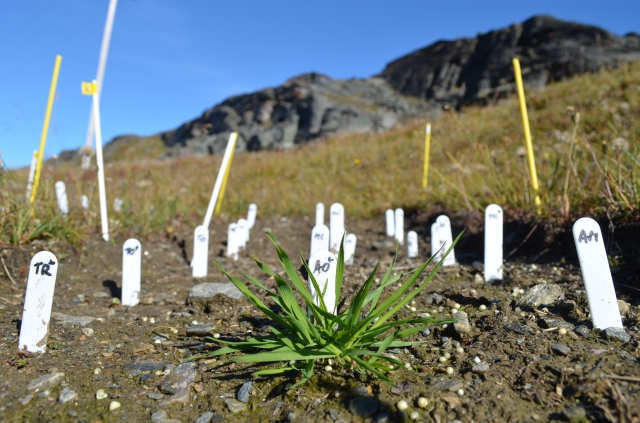 Sweetgrass (Anthoxanthum odoratum) beating the odds in a disturbed plot on a south-facing slope.

Yet where to find warmth in these environments, you might ask? Surprisingly, the mountain climate is often drastically less harsh than one might expect when considering environmental heterogeneity occurring at very small spatial scales, even at high elevations. This is for a large part due to the complex topography of mountains: soils on south-facing slopes for example – which get a lot of direct sunlight all day long – can easily be 7 °C warmer than their surroundings. Yet humans themselves are creating such warm spots as well, by removing the alpine vegetation along trails, for example. The vegetation normally provides a buffer for extreme heat production at soil level during the summer, whereas removing it will increase the temperature. For tiny seedlings, these extra degrees might be lifesaving. In winter, on the other hand, a protective snow cover shelters the small plants from below-zero temperatures.

The surprisingly high success of exotic plants in warmer and more disturbed plots suggests that spread of exotic species into cold mountain regions is likely to increase significantly in the future, if climate keeps warming and anthropogenic disturbance of pristine alpine regions is not halted. But even now already, exotic species can make use of the warm spots in the landscape, either natural or augmented by humans, as stepping stones to reach higher elevations. The potential for exotic species invasion in cold environments is thus most likely heavily underestimated.