Posted on December 27, 2016 by lembrechtsjonas

In these closing posts of 2016, I want to give you a quick (and slightly biased) overview of everything what happened this year, based on the ten most appreciated posts on this blog. This is part one.

2016 has been an important year for the science here On Top of the World. The year brought a high in- and output, with sessions of highly successfull fieldwork, international collaborations, a few scientific publications, and outreach to the larger public as a cherry on the cake. At 3 years and 3 months in the project, the efforts are finally truly being rewarded. Here are 5 of the highlights:

The cathedral of Amiens, France

The princess of the north: January started bright, with a visit to colleagues in Amiens, France. The visit lasted no longer than a week, yet sometimes even a few hours in the presence of someone with more experience results in a leap forward with your own work. Statistical tricks and climatic models, a lot of what I am still doing now had its origin there in Amiens.

Temple on top of Le Grand Donon, a peak in northern France

Lessons from history: Topic-wise, the whole year has been about disturbance. Humans intervening with nature, changing its balance and the cascade of effects that results from such disturbance. This disturbance has been around as long as humans have, as shown by the temple on top of Le Grand Donon in this picture. Yet recent increases in this disturbance, together with an inevitable climate change, results in impressive changes all over our natural world. We want to find out what will do to the plants. 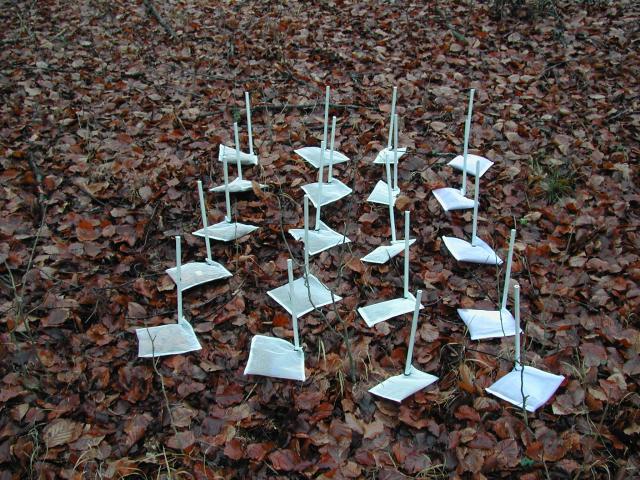 Experimental litter in bags in beech forest in Denmark

On how leaves decompose: While we originally focussed on aboveground processes within this project, I got more and more convinced this year that a big chunk of the important stuff actually happens in the soil below our feet. We are digging deeper and deeper, looking at how fast the soil breaks down plant material, how fungi in the soil affect where plants can be found and if the climate at soil level is actually much more relevant for plants than what we usually use.

Plant traffic along mountain roads: With MIREN, the Mountain Invasion Research Network, we look at mountain roads and how they affect plant species distributions. They facilitate plant invasions, we knew that, but it turns out that roads are also busy with native species travelling both up and down the mountains. These travels in both directions were shown in our paper in Ecography.

Young beech leaves with a bluebell field in the background

Beech and bluebell: Research also involves teaching the next generation of scientists, one of the most beautiful parts of the job. My favourite way of doing that is by showing the students the magic of the Hallerbos, the mythical and world-famous bluebell-forest close to Brussels. Every spring, we send them on an exploratory day through the forest to learn about the interactions between soil and vegetation and how to learn a lot about a system by just looking at the plant species.

1 Response to An overview